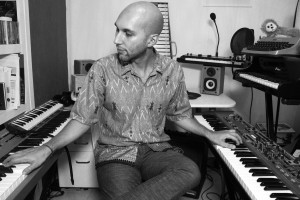 Rodrigo “Guilo” Villa is, above all, a self-organized musician, multiinstrumentist and composer. He studied classical and traditional piano at the superior music conservatory “Manuel de Falla”. He’s is been working at the education field in the transcription into piano of Latin American popular songs. Pianist of classical and academic tradition, he has been translating and arranging songs of authors such as Fito Páez, Charly García, L.A. Spinetta, Silvio Rodriguez, among others, with the object of including popular songs into new generation of artists’ education. In 2015 he realized his first solo material “Y nosotros sin el sol”, produced by Guido Cefaly and with Ariel Lavigna as mix engineer. In Can Serrat he will finish composing his second album “Amncay”, a project focused on the sound experimentation from everyday objects (music box, typewriter, piano toy) which dialogue with a more conventional format related to pop, rock or electronic music, always with the aim to conceive music not as a format but as a universal language.