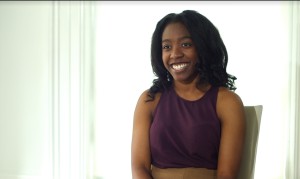 Elisha Nain is a writer, project manager, producer, model and singer. She loves to write about intimate relationships, exposing the discords and harmonizing moments between us. She finds that journaling and creating the ultimate music playlist for each story provides her with the self-reflection she needs to flesh out the major chords in her tales. Elisha Nain has a deep interest in the human connection and our relationship with the environment. Imperio Karstico – a short film that explores the destruction of the Puerto Rican karst – was Elisha’s first attempt at documentary writing. The film became an Official Selection of the Gray’s Reef Ocean Film Festival. In 2015, Elisha decided to use her documentarian skills to tell a personal story about her struggle with homelessness. She filmed, wrote, and sang in her film Our House, a tribute to her family after they lost their home while she attended college.

Elisha believes that her unique mixed heritage along with her suburbanite upbringing gives her a plethora of cultural textures to inject into her stories. She is Sierra-Leonean, Panamanian and Black, raised in a Jewish-Christian household. While her multicultural upbringing made it difficult for her to assimilate into social groups as a child, she finds that her family roots are essential to her artistic process. She hopes her stories will recognize Afro-Latino Americans on official documents, putting an end to the “other” option.