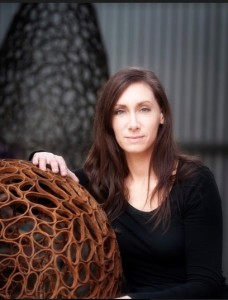 Astra Parker is a visual artist based in Adelaide, South Australia, working predominantly in sculpture. Her practice surrounds an interest in the processes of structural change, drawing parallels between the world explained through physics and the world seen through a sociological perspective. A central focus of this being perceptions of wholeness and separation in both physical and social environments. Her making processes often consist of the deconstruction and restructuration of a form, reconfiguring the individual elements to

create a new whole; thus reflecting the nature of structural alteration through time.

Graduating with a degree in fine art in 2009, and a Graduate Diploma of Contemporary Creative Practice in 2015 she has since exhibited prolifically throughout Australia and internationally. The recipient of several art awards, her works have been shown in institutions such as The Perth Institute of Contemporary Art, The South

Australian Museum and The Canberra Gallery of Australia among others. Represented by galleries in Adelaide,

Sydney, Melbourne, Perth and Hong Kong her works are held in private and public collections throughout

Australia, Asia and the UK