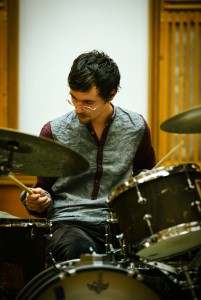 In June 2015, Andi Stecher’s first solo album “austreiben / antreiben” was released through Heart of Noise Editionen. The record is a work about and a personal take on mask traditions and pre-Christian Alpine traditions, which are widespread all over Europe. Right now, Stecher works on his new solo record, exploring the possibilities of melting musical and rhythmical forms of newer styles of club music with traditional and/or tribal music from around the globe.