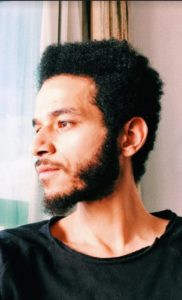 As an artist and freelance filmmaker, Mohammad Al Faraj’s practice reflects a collaborative and multifaceted relationship to making and sharing content, moving with ease between commercial jobs, network television projects, artworks for exhibition and material shared via social media.

When he is home, in Al Hassa, a city located in the Eastern Province, home to Saudi Arabia’s largest oasis and most productive oil fields, he works with a loose group of collaborators, who regularly come together to support each other’s projects and produce photo and film content in order to reflect on changes in the landscape and in ways of life they have witnessed during their lifetime. Commercial and television assignments often require him to travel, at times sending him to places he has never been before, and affording opportunities to see more of the country, meet it people and shoot footage for future endeavors.
Al Faraj’s work has been shown at Athr Gallery, Jeddah (2018); Le murate Pac, Florence (2019); 21,39 Jeddah Arts (2017, 2019); Saudi Film Festival, Dammam (2015) and Dubai International Film Festival (2014). Mohammed worked as a programmer in both Saudi Film Festival and poetry house festival in Dammam. He was awarded first place within the student category for his documentary Lost at the Saudi Film Festival, Dammam (2015).

Al Faraj graduated from the King Fahd University of Petroleum and Minerals with a BSc in Applied Mechanical Engineering 2017. Born in 1993 in Al Hassa, Saudi Arabia, he currently lives and works in the Eastern Province, Saudi Arabia.