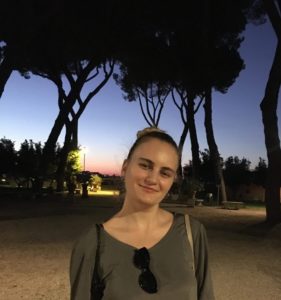 Kirila Cvetkovska is an independent cultural practitioner from North Macedonia. Her writing and artistic practice dwell on the themes of collective memory, loss and detachment, exploring cross cultural values and their manifestation. She is involved in collaborations both in the Balkans and internationally, focusing on social, literary and historical explorations, writing and creating visual narratives.

Kirila is part of the curatorial and programming team for EternalTiber – a multidisciplinary cultural project for the revival of the Tiber River in Rome (Italy), through collective urban reimagining and site-specific contemporary art, as well as the producer and curator at the Center for Audiovisual Arts in her little hometown (Kriva Palanka) in North Macedonia, focused on community engagement through art and culture. She also collaborates with artists from her hometown in the attempt to bring their work outside of these margins.

Kirila has taken part in numerous residencies in the Balkan region, Europe and USA. She holds a BA in Art History with a minor in Psychology from John Cabot University and she is a United World Colleges alumna.

Kirila will be part of the Remota program in March 2021