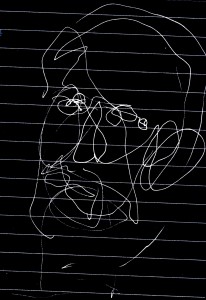 Matías Ygielka Rimbaud published his works in Spain, Argentina and Uruguay, where Yaugurú Publishing House recently printed his manifesto La escritura sin escritor (Writing without writer). He also carried out object-publications, collaborated with theatre projects and experimental music and participated in exhibitions in Argentina and Brazil with his visual explorations. Linked to guerrilla actions, he has written the controversial text Subvención Forzada para Proyectos Artísticos (Forced Subsidy for Art Projects). In 2014 he carried on the public intervention Salid del tiempo al espacio in which he chided people through a massive poster distribution throughout the city of Buenos Aires, urging them to report to a mailbox. This action had its replica in Paris and recently in Berlin, where began his project Final Conference About Yourself, an endless literary experiment that will be put up from predictions and meeting with visionaries from around the world. Shortly he will publish his novel La máquina de dejar de escribir (Cease writing machine) together with Wu Wei Publishing House in Argentina.