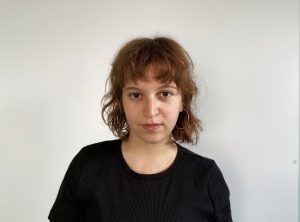 Luna Schapira was born and lives in the Autonomous City of Buenos Aires. She is 26 years old; she writes, acts, is a visual artist and DJ. She trained in writing with Ana Katz, Romina Paula, Carolina Cobelo, Iosi Havilio, Pablo Katchadjian, among others; she is currently a student of the Bachelor of Arts in Writing at the Universidad Nacional de las Artes. She is interested in training diverse textual modalities and investigating their crossings as well as the relationship between literature and other artistic disciplines. She has read her narrative samples in cultural spaces; she wrote and directed: “Falsa Fiebre” (play winner of the 2019 grant of the Fondo Nacional de las Artes), “Flipper” selected in Microteatro (December 2019). She worked as an actress in several shows such as “Palabras para conejos” by Amalia Tercelán, “Las viajantes” by Ezequiel Tronconi, “Asuntos que coneman” by Jimena Pérez Salerno; co-starred in “El líder” UN3tv series, participated in the feature film “La protagonista” by Clara Picasso, among other audiovisual projects. She worked with Claudio Hochman in the realization of visual pieces based on his texts; she illustrated Laura Rozenberg’s book “El ángel del origami”; she gave collage classes and made numerous posters for events and plays. She currently teaches acting classes and is in the process of editing her first novel.

Luna takes up residence at Can Serrat during the month of January 2023.