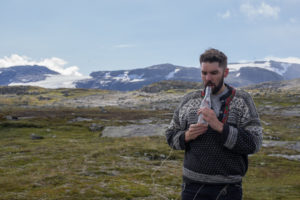 Henrik Koppen (born 1990) is a performance artist from Velsvik in Sunnmøre, Norway. In addition to working with performance art, he works with music, sound, sculpture and drawing. He is engaged in different collaborations such as the performance group HITYAMAC and the duo Koppen & Jorkjen. He has a BFA from Bergen National Academy of art and Design.

An essential work of his is a series of performances called ‘Giving and Taking’ where he collects liquids from different trees. He has for instance collected birch sap, made pine needle oil and burned tar from pine fatwood, that he then has used in live performances. He explores themes around “flux” and the relationship between humans and nonhumans considering the time we live in, with ecological catastrophes and global warming, where human beings get conscious about their role in the world in a new way.

Henrik makes his residence at Can Serrat from October-November 2021.