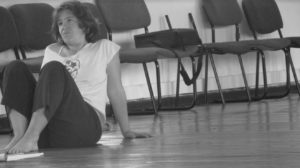 Juliana Borrero Echeverry is a writer, translator, and performer.  When she grows up, she is an aspiring cabaret artist. Sometimes incendiary, at others mystical, then a frightened girl all over again. Colombian, resident in Tunja. B.A in Literature, M.A in Embodiment studies at Goddard College USA and a partial one in Live Arts at Universidad Nacional de Colombia. Literature is a suit that stopped fitting a long time ago. Her work: stretching, unfolding, unknotting, and shredding the text.

I write from the end of the world because I cannot stand it any longer. I write from the end of the literature. Tired of its hermeticism, its promises of coherence, its ego, its obsession for the finished work. Tired of its deafness to other arts, I write from contamination. I make writing that sings and dances and crossdresses and still insists on being called literature. I write from the fatigue of discourses and their failure to do something for the sick world in which I live. I recycle, I sample, I make holes in language. I build a text birthed from the fine bitch of literature and all the other stray dogs I can find. I write from the body. I mutate when I write. I use language to make secret operations. I write like doing witchcraft. I write a book called “Las extraterrestres” and I pray every night that they will make themselves present and show me the way.