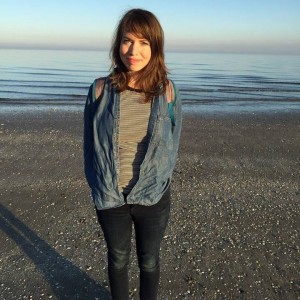 Sarah Goodchild Robb (USA) is an interdisciplinary visual artist and art organizer currently based in Barcelona.  She works abstractly and through woodworking, photography, and drawing she references the body in relation to natural forms and built environments.  She received her MFA from The City College of New York, CUNY (2014) and her BA in Art History and French from Bard College at Simon’s Rock (2006).  She was the AIR at  Art4Life in Portland, OR (2011-2012), and completed residencies at Picture Berlin in Berlin, Germany (2013) and at Can Serrat in El Bruc, Barcelona (2015 and 2016).  Her work has been shown in the United States and Germany.  In October 2015, she curated Fragments of Space at academic, a gallery based in Long Island City, NYC.

This August at Can Serrat, she is working on a series of drawings, paintings, and prints that investigate the surrounding natural environment of Monserrat National Park.  She is also assisting the residency with artistic coordination by preparing orientation materials, translating and editing texts from Spanish to English, and conducting tours to new residents.