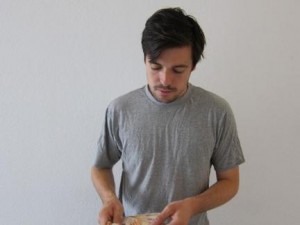 Rubén Patiño, also known as Pato, (Barcelona, 1979) is a Berlin-based artist working in the field of Electronic Music and Visuals. He is focused on the sculptural properties of synthetic sound while exploring the limits of concert, public event and installation. In particular, Patiño works within the field of sound synthesis while exploring the audio-visual creative potential of programing environments and algorithmic composition.  All of his work tend to contain different strategies regarding space and presentation formats, while combining sound, lights, text, image or found materials with elements of early electronic music, ideograms and 20th Century art movements.  He has published works with several labels such as Anòmia, Free Software Series, Alku and has upcoming records on Ge-Stell and HyperMedium. He has also created multichannel pieces, installations and has played solo concerts extensively.

Since 2013 he has been involved in N.M.O., a rolling computerized ceremonial aerobics unit that, together with percussionist Morten J Olsen, operates in a hybrid territory between club music, performance and inventive forms of sound spatialization. This is what they call ‘Military Danceable Space Music and/or Fluxus Techno’.  Rubén Patiño has also collaborated with Arnau Sala aka Exoteric Continent and with Roc Jiménez de Cisneros in Super-boredom. A series of multi-channel audio pieces that uses an extremely rigid temporal structure.  Long exposure to these pieces is key to allow for this immersive experience and truly induce the listener into a state that distorts her perception of space and time.