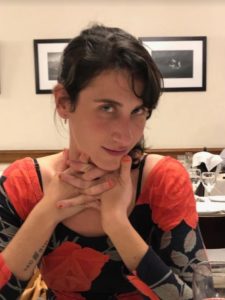 Screenwriter, writer, and theater director. She graduated tertiary school in screenwriting (Laboratorio del Guión). She trained as a playwright with Mauricio Kartun and Ariel Farace. She is currently pursuing a degree in Arts of Writing at the University of the Arts. She directed her second play, ¨Única,¨ which premiered in 2018. She wrote ¨Un viaje a los deseos¨, which premiered at Grand Rex. In 2017, she won a special mention at FAUNA for her story ¨¨El Marley metalero¨. She was also a part of the competition selection at BAFICI 2017 for the short film¨Mundo Country¨ which she wrote and directed with the support of the Fondo Metropolitano.