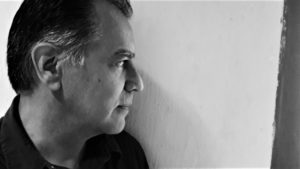 I come to Can Serrat in 2021 to work on a novel that, for the first time, allows me to explore my own story/history: from my adolescence in the war in El Salvador, through my exile in San Francisco and New York, until my return to El Salvador after the war. I seek to explore the effects of historical events transform us, and the consequences of our actions and decisions as we struggle to survive and preserve our human dignity.

Jorge Ávalos (El Salvador / Chile, 1964). Poet, playwright, and storyteller. In El Salvador he has won several national awards for his plays, essays and fiction. His staged theater has been awarded twice with the Ovation award for The Ballad of Jimmy Rosa (2009) and The Song of Our Days (2014), and a third work, Guardian Angel, inaugurated the International Theater Festival of Buenos Aires, organized by the Teatro Colón (2014). For his narrative works he received the Central American Rogelio Sinán Award from Panama for The City of Desire (2004), and the Monteforte Toledo Award from Guatemala for The Angel’s Secret (2012).

Jorge makes his residence in Can Serrat during August-September 2021