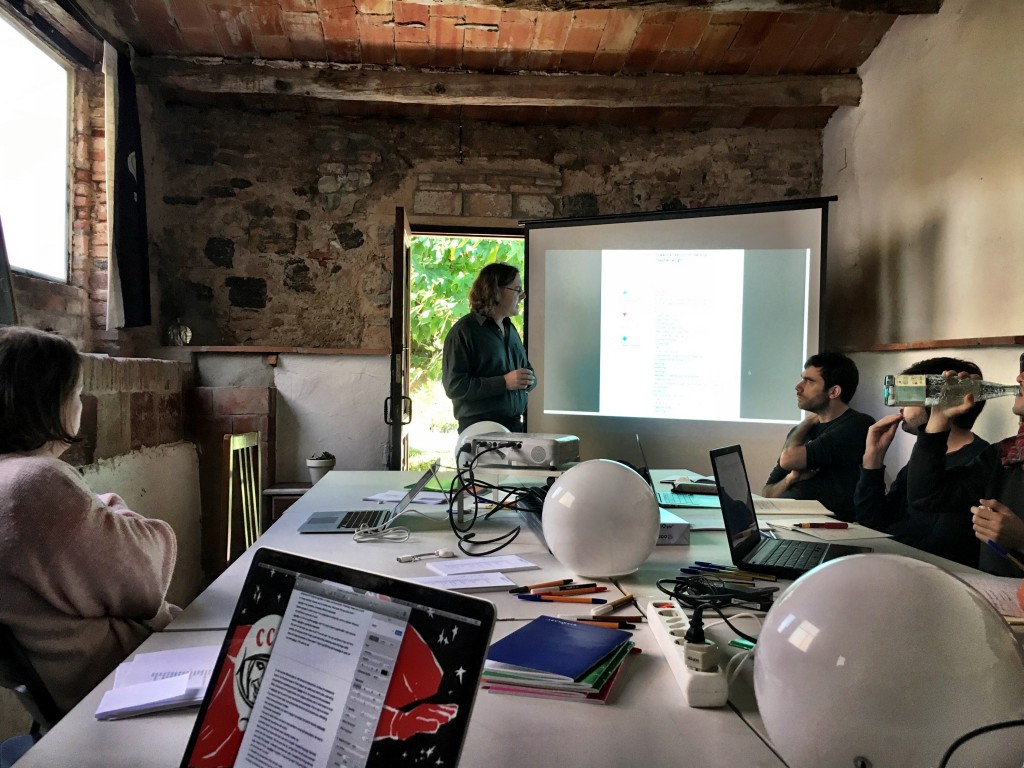 Collaborative translation project in Catalan and Spanish of the contemporary art essay book ‘Toward a Lexicon of Usership’ (2013) by Stephen Wright.

“In four Sunday-afternoon sessions over the course of November at Can Serrat, we set out to test and verify a bold and untried hypothesis: that to read a text is, in essence, to translate, counter translate and retranslate that text. That would mean that the robust use of a text — really reading it — would be to bring it quite literally into life and words in a different language. With a group of a dozen or so users-translators, we set about translating into Catalan and Spanish Toward a Lexicon of Usership — a short theoretical book in the form of a lexicon, seeking to tease out the implications for art, knowledge and political action of the increasing importance of usership as an aesthetic and political-economic category, which makes the claim that usership transcends the opposition between consumption and production, for it is both (and neither) at once — merely by carefully reading it together. None (or few) of us were expert translators; none had the time to actually translate a book; but that was just the point: the desire to read works together, allowed a translation (in fact, two translations) to emerge

In the coming months, starting in mid-January, we will bring these open wiki translation labs in different formats and places, opening them to new users, but at the same time trusting a committed core group: those who have been in the project from the beginning, and that will supervise the final version that will be published digitally and printed at the end of 2018. “

Toward a Lexicon of Usership, talks about the concept of “uses” as a figure of “users” – or more precisely the category of political and creative subjectivity called “usership” in English – that has become increasingly important in the last 15 years with the emergence of culture 2.0. The user is neither a passive consumer nor an active producer, but, in some way, both at the same time; its ability to generate content, information and value, without working, questions the set of conventions of modernity, starting with the definition of work, displacing or replacing the category of observer in the field of knowledge to owner in the field of the political economy. “Toward a Lexicon of Usership” (2013), by Stephen Wright, tries to take the measure of this paradigm shift that seems to require a true reorganization of the conceptual vocabulary inherited from the 20th century. By examining around 50 terms, some for being “withdrawn”, others that refer to emerging forms of use, and some names that are often referring to old practices but still widespread, the book “uses” the literary form of the glossary to rethink and reuse the conceptual vocabulary.

After several sessions in which we were translating and debating, we decided to give more possibilities of understanding and collaboration to this laboratory, beyond the single sessions in production centers. Since then, the translation activity is also done digitally and remotely, through weekly meetings with Skype.

Every Wednesday from 3pm to 7pm, an online translation session with Matecat is open. Specific doubts will be resolved to all participants. During those hours the coordination team composed of Elia Cervera, Blai Marginedas and Anna Dot, will be accessible via email.

The meetings in the centers are moments of exchange and dialogue, allow to generate debates regarding content issues, specific points of translation, and give more time to collective reading sharing the same physical space.

The next centers that will host translation sessions are Hangar and Nau Côclea. (Dates to be confirmed).

This project is done with the collaboration of the production art centers members of Xarxaprod: Hangar, Roca Umbert, La Escocesa, ACVic, Nau Côclea, and Can Serrat.

Stephen Wright is an art theorist, curator, and professor. Born in Canada, he lives and works in Paris where he is the coordinator with Mabel Tapia of the PhD ‘Document and art’ at EESI european art school. His own research includes 1: 1 artistic practices, questioning the conditions of possibility and use of an art without a work, without an artist, and without a spectator, that is, an art deliberately evading the horizon of the event.

“In 2013, I published ‘Toward a Lexicon of Usership’, a kind of “lexicon of uses”, trying to rethink the vocabulary and institutions inherited from modernity.”

HERE IS THE WIKI_LAB_ONLINE PROTOCOL

Translate those paragraphs that have the sidebar white (untranslated).

Prioritize the use of comments in the paragraphs in blue (translated paragraph), ahead of the direct correction, in order to facilitate its editing.

HOW TO USE THE MATECAT:

Access one of the links on the Matecat edition page: