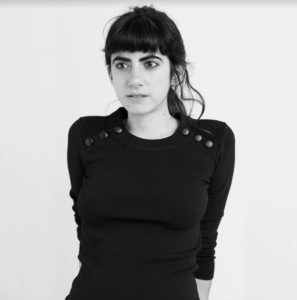 Agostina Luz López (1987) is a writer, actress, and theater director. Her works show the links between human beings crossed by the wild and vulnerability. She works with visual artists, filmmakers, and musicians creating interdisciplinary pieces.

She directed “mi propia playa” and “la laguna”, with which she toured the Theater Spektakel festival (Switzerland) and the Performing Arts festival Noorderzon (Holland) and the festival Dos Pointos (Brazil) and with which she won Numerous awards. She participated with Laura Kalauz in a project called “Proyecto de Fuga” at the Theaterdiscuser Monologue Festival, in Berlin and in the cycle “Mis documentos” curated by Lola Arias.

She makes the “Watch and Talk“ program at the Theater Spektakel and at the residence of international playwrights at the Royal Court Theatre. He premiered “Los Milagros” at the Cultural San Martín and the play“Animal romántico” at the Sarmiento Theater. She published his first novel, called “Weiwei” (NoTanPuan, 2016, Elefante, 2018) which won the second prize of the Fondo Nacional de las Artes.