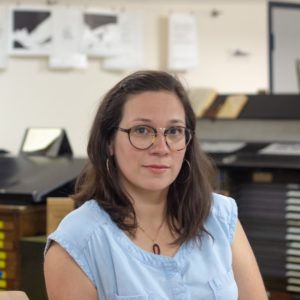 Lauren Cardenas is currently the Assistant Professor of Printmaking, University of Mississippi, Oxford. She is a studio artist who focuses on print media. She was the editor and founder of PIECRUST Magazine (2011-14), which was a biannual art and literary magazine based out of St. Louis. During that period seven small press publications were released. Lauren also was a co-founding member and co-director of Museum Blue (2014-17), an artist-run project space in St. Louis. Co-curating many exhibitions, in attempts to bridge the gap between art and literature. Along with her curatorial and publishing practice, she was a founding member and an active part of the steering committee of the St. Louis Small Press Expo (2014-16). Cardenas holds a BFA in Painting, Printmaking and Drawing from Southwestern University in Georgetown, TX, she has completed the Tamarind Institute Printer Training Program and holds an MFA in Visual Art from Washington University in St. Louis.