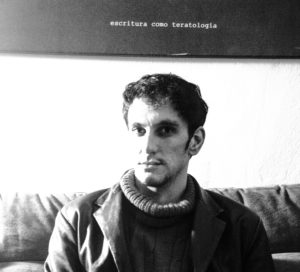 Writer, artist and independent researcher. He has published his work written in Spain, Argentina, US and Uruguay. Linked to experimental writing and what he calls writing interventions, his work has been awarded and recognized both in Uruguay and internationally. He has collaborated in the role of producer and artistic collaborator in various contemporary theater projects and performance cycles in Buenos Aires and European cities between 2013 and 2018.

In 2015 he co-founded and since then has been a member of the artistic collective CAS in Buenos Aires, which operates also as a sound label and platform for the dissemination of sound artists and unclassified music. Linked to artistic actions of expanded writing, in 2014 he carried out the public intervention Exit from time to space, in which, through a massive sticker of posters throughout Buenos Aires, he exhorted passersby with certain slogans to report to a mailbox. Action that was replicated in the city of Paris and later in Berlin, where the project Final conference about yourself began, an endless performatic-literary project that is collectively constructed through predictions and encounters with seers from all over the world. Since 2017 he has published his research articles on sound, writing, contemporary art and esotericism in various magazines.