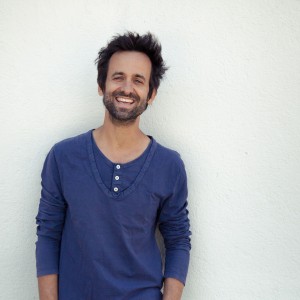 Ivan Andrade is a Catalan writer and director who holds a degree in Microelectronics Engineering from University Autónoma of Barcelona, and a Master’s Degree in Dramaturgy and Playwriting from the Royal Holloway University of London (funded by the SGAE Foundation).

As an actor, he has worked for more than 12 years in theatre, cinema, and television mainly in Barcelona and internationally. His writing and directing career began in 2013 with some adaptations and small pieces that lead him to co-found The Amateurs Company in 2015 with the intention of producing their own inter-disciplinary small and medium-size projects, both in Spain and the UK, where he is based.

This directing career is very linked to Ivan’s research on the relevance of the actor’s body awareness in performance. As an actor himself, he tapped on many body disciplines through workshops and other courses. In 2010 he becomes a Somatic Trainer, after graduating as a Qualified Practitioner of the Grinberg Method. He starts then the project ‘The Conscious Body’ in which he researches a training method for singers, actors, and dancers that develops the performers’ physical awareness onstage, focusing on the somatics of fear.

‘The Conscious Body’ advocates for the development of the performer’s physicality through acknowledging and embodying the energy/excitement/fear that arouses in front of an audience as a way to achieve an enhanced state of performance: a sort of permeability that allows the performer to perceive and respond to reality with a high level of presence and creativity.

His recent works for The Amateurs include authoring and directing ‘A Little Prince’, a contemporary musical adaptation of Saint-Exupéry’s ‘The Little Prince’, presented at the Brighton Fringe Festival in 2016, award-nominee for Best Musical Show; and ‘A New Beginning’, a dance-theatre science-fiction piece presented as a work-in-progress at Nau Ivanow in 2016, which will premiere in July 2017 opening the runoff Festival (Barcelona), and will travel to other festivals in France.

As a playwright, Ivan has written a few short and long pieces, being awarded for his play Russians with the Premi Entreactum in 2014, and the Premi Arsènic in 2015.