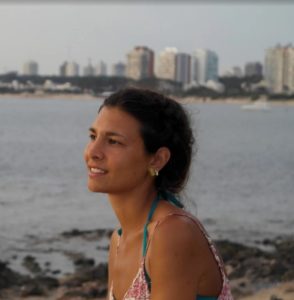 Born in the city of Buenos Aires to an Argentinian mother and a German father, at the age of 4 I moved with my family to Mexico City, and later, to Guadalajara, where I attended primary school.  I internalized this formative experience within a country that was foreign and new to my family, and which instilled in me something of Latin American culture.  Mexico is a country that loves its culture and preserves it in such a way that one makes connections between its history, ancestors, and traditions in the day-to-day.

Ten years later, my family decided to return to Buenas Aires, the place where we had thought we would return much earlier.  There, I continued my studies in secondary school at a German Goethe high school.  My father always shared his German culture throughout our lives, and we incorporated his heritage into our daily lives as well.  Although returning to Argentina meant coming back to my birth city, I did not have the sensation of returning to my native home.  Indeed, we brought along with us our multiple cultures, the different paths we had taken in other places up to where we had ended up.

Far from feeling that these changes were difficult and uncomfortable, I managed to take advantage of them as an opportunity to learn how to adapt.  Likewise, this characteristic in me and the mix of cultures I carry within me allows for a unique identity.  Once I completed my primary and secondary education, I dedicated myself to a new subject: architecture.  (My mother is an architect).  I began my career at the FADU in 2006, which I completed in 2013.  Since then, I have worked in various environments within this career, including public, private, and independent projects.

In the final years of my architecture studies (2011), and seeing that the end was approaching, I contemplated the possibility of continuing to research and acquire knowledge.  As I was drawn to the arts, I decided to enroll in the Bachelor of Arts in Visual Arts in UNA (2011-present).  There, I discovered how to connect the ideas and themes that interested me.  I do research with visual elements, spaces, and have learned how to generate works of art that come out of conceptual thinking.

I was invited to make an intervention in a public space, in the City of Mar del Plata in 2015,  in the trees on Alem Street. I have made work, mainly of painting, in the IUNA San Fernando 2012, in the Municipal University Center of San Fernando 2013, and shown in the annual exhibition of chairs of the Xul Solar Headquarters of San Fernando in the Museum of the City of San Fernando 2016-2017.  I participated in the Encontro de aristas Novos in the city of Atlántida, Uruguay, organized by the Spanish Cultural Center of the city of Montevideo 2015, where for several days we exhibited our works to other artists from around the world and interacted with artists from different fields and nationalities. I have participated in workshops and seminars & immersion in the world of art&quot with Pablo La Padula, Usina del Arte CABA, October 2017, CONSULTANCY OF ART, directed by Marcelo Gutman and Daniela de la Rez, and the Integral Center for Cultural Education, May 2017. In 2018, I participated in the Espacio en Blanco residency organized by acePIRAR, an international program of artistic residencies in Buenos Aires. There, together with a group of artists, everyone works on individual research, but shares debates, ideas in common, and organize shows.