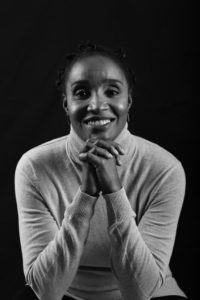 Jackeline Rojas A. (Havana, 1973). Cuban, woman, Afro-descendant, islander, Latin American. All this has marked her path in literature and her particular way of seeing and understanding the world: both the world of creation and the universe of the symbolic and the physical. Since her adolescence, she has been interested in literature. Graduated in different languages: English, French, Italian and Portuguese. She has taken courses in photography and has a degree in Psychology from the University of Havana. She has participated in several courses on narrative and poetic techniques, among which stand out those given by the Center for Literary Creation “Onelio Jorge Cardoso” and the Hispano-American Center of Culture. She was a member of the Course-Workshop for the formation of writers dictated by the Literary Group Letra D’Kambio, at the Casa de Cultura Mirta Aguirre. She is currently a member of the Writing Laboratory “Encrucijada”, directed by writer Elaine Vilar Madruga. She has collaborated as an author with the project Troyanas en Cuarentena, directed by the playwright and writer Ámbar Carralero. Her mini-story Las tres Marías was selected as part of the anniversary edition of the literary magazine Ediciones Alborismos (Venezuela 2021) and a selection of her poetry has been published in the magazine Trinando #34, corresponding to November 2021, and in the magazine Margen de Luz.
His children’s story Herencia (Inheritance) won Second Prize in the International Contest “My Place in the World”, organized by Black Barcelona, 2021. Her poem La consagración was published in the magazine Herederos del Kaos (Barcelona, 2021).

Jackeline will be in residence at Can Serrat during the month of June 2022.