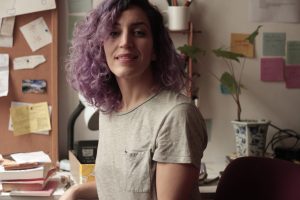 Her work is built around dreamlike worlds, where the fascination for materialities has as much weight as metaphysical questions. Using as a medium a variety of languages (theater, poetry, video, installation, and performance) Agustina investigates perceptions, reality, and fantasy, the construction of one’s own identity. She seeks to find the boundaries between these concepts and thus inhabit liminal, intermediate spaces, to create narrative forms that, as in dreams, find their own logic in the universe they invent. He is interested in art as a collective activity and considers art and magic to be animals of the same kingdom.

Argentina, she lives in the city of Buenos Aires. She has a degree in Audiovisual Design from the University of Buenos Aires and a master’s degree in Creative Writing from the Universidad Tres de Febrero. She has been working as a writer and director since 2006, with plays, performances, and video installations that are exhibited in various theaters, festivals, and galleries. In 2020 she published her book of dramaturgical texts “Repetición de un naufragio”. In
In 2022 she received the full scholarship to do her residency as a writer at Can Serrat for two months.

Agustina does her residency at Can Serrat during the months of June and July of 2021.