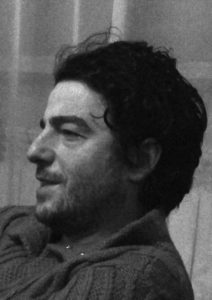 Vaughan Pilikian was born in London in 1974 to an American mother and Armenian father. After studies in classical languages, fine art and filmmaking at the universities of Oxford, Cambridge and Harvard, he has produced work in many different fields as a scholar, poet, filmmaker, painter, sculptor, designer, theatre director, performance artist and screenwriter. His career to date has seen him chasing burning barrels in a village in Devon, filming the lives of shipbreakers in northern India (which saw him nominated for a Grierson Award), translating Sanskrit epic the Mahabharata and being banned from Resonance FM for a prescient satire on Donald Trump. In 2012 his play Leper Colony ran for three weeks at the Yard Theatre in London to controversy and acclaim. In 2016, he was the first and, it turned out, the last British Council Resident Artist in Transcarpathia, Ukraine. ‘Flight,’ his 2019 feature documentary about the refugee crisis, has just been nominated for a British Independent Film Award.

Vaughan will be in residence at Can Serrat during the months of May and June 2022.