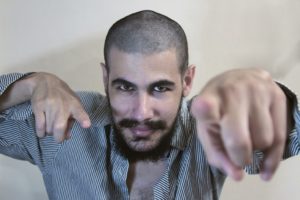 Jorge Pablo Lima was born in Versalles, Matanzas, east of Havana. He lives and works wherever the night finds him. In 2014 he achieved a degree in visual arts from the Instituto Superior de Arte (ISA) of Cuba, with the work “TAZ (Temporarily Autonomous Zone)”. In 2008 he obtained a prize in the poetry contest “David” with the book, “Lecturas del cuerpo”, and since then he has published his texts in various formats and magazines, inside and outside Cuba. In 2012 he held his first personal exhibition “La casa que no existia” (The house that did not exist) at the “Galería avistamientos”. He has participated in two Havana Biennials. He is a member of the revolutionary group of inaction art “Balada Tropical”. He has participated in more than 20 collective exhibitions in different galleries: Wifredo Lam Contemporary Art Center, Factoría Habana, La Moderna Gallery, etc. He is currently (that is, almost all the time) working on the book “The Volume of Resistance”: an anti-examination on the nature of the creative act and the procedures that enhance it.

Jorge Pablo will be in residence at Can Serrat during the month of February 2022.